Most modern business organizations base how they work and what they work on off of a large amount of data. However, not every company treats this data in accordance with its importance. Some even take it a step further and just hope that bad things won’t happen to them.

Just as end users only read manuals when something actually breaks, companies sometimes only start to appreciate the option of creating backups after the data has already been lost or corrupted. In general, there are two mistakes that people make regarding backups:

So what can we do to prevent data loss? Let’s have a deeper look at how each of these two issues regarding backups affects companies and show you how they can be resolved.

Based on statistics for 2019, about 86% of businesses worldwide backup their data. This means that the remaining 14% of enterprises, whether knowingly or unknowingly, put themselves and their data at risk. You might say that this percentage is very small but, given that these days most businesses are inextricably linked with technology and each other, this is a rather significant amount and the failure of one business could quite easily create a knock-on effect that affects a lot more businesses.

So what are the main causes of data loss? Here’s a list with the latest statistics: 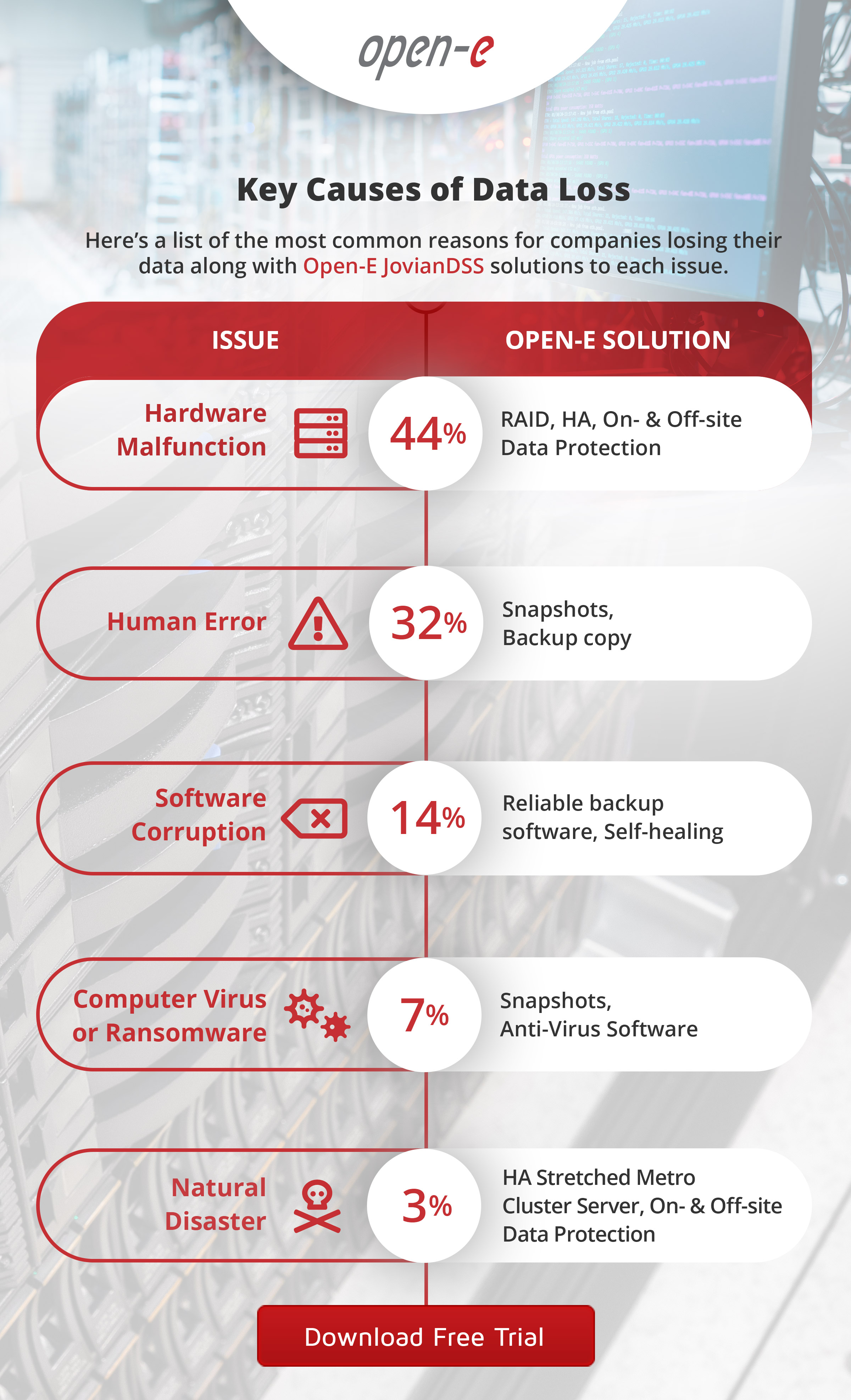 Of course, these situations may occur while using a backup as well. However, if you use the correctly set up configuration, you can avoid most of these problems.

Check if Everything Works Well

Creating a backup for your enterprise is a huge step in the right direction that requires a highly responsible approach. This can lead to a lot of positive things, but only if it’s done correctly. Let’s have a look at the main aspects to be considered.

Keeping up with Backups

There are various configurations available with any data storage solution that has backup servers and the process of setting one up can quickly become pretty complicated. Unfortunately, the fact is that even if a configuration was set up correctly, it can’t provide us with 100% guarantee that nothing will happen to the data over time.

You’ve probably heard that the movie Toy Story 2 by Pixar might have never happened due to data loss caused by human error (as we’ve already shown above, this is one of the most common reasons for data loss occurring). Yet this arguably wasn’t even the worst part of this story. The fact that their backup, created on the backup server, wasn’t continuously checked and the data was not backed up for a whole month may even be considered worse than someone accidentally deleting the movie. In any case, we can consider this a lesson learned. One of the worst things that can be done with backups is to create one and never check on it again.

First, let’s start with a description of a retention plan. At Open-E, we describe a retention plan as follows; a retention plan is the process of automatically creating and deleting snapshots at a frequency that the user sets. This can be done on any source a user chooses. It can even be done with backup copies, which are typically located either on the local or remote backup server, perhaps even possibly both. A retention plan combines several rules such as the intervals that the snapshots are made at and their retention periods, i.e., how long the snapshots should be kept on the main node and, optionally, on a second node as well (Off-site).

It’s essential to mention that a snapshot is not a backup itself. However, it can be used as one. When a snapshot is copied onto the backup server, it can be used to recreate the data on the snapshot by transforming it into a clone. Snapshots function this way for better protection against any data loss or corruption, including ransomware. Given that snapshots are made in a read-only format, they cannot be encrypted.

During the configuration stage, it’s essential to decide which retention plan is the most suitable for your company’s needs. For instance, you can take snapshots every five minutes or once a week – it’s up to you. But sometimes, these configuration settings can be set up incorrectly.

For example, let’s say you work in an organization where business-critical data is constantly being changed throughout the workday. However, the backup is created only once a day to avoid overloading the system. Due to that, most of the business-critical data that was created during the course of a workday may be lost if a problem occurs towards the end of said workday but prior to the daily backup. Using Open-E JovianDSS’ retention plans, you can record the state of the volume as often as needed, without any waste of time or significant risk of overloading your system.

Not a long time ago, one of our clients requested our support as all the snapshots that they kept as backups at an off-site location disappeared. When our team looked into the problem, it appeared that the retention plan was set incorrectly. The client had set the off-site retention plan for a much shorter time than was required and the older data they wanted to reach was erased. This is why you should ask yourself the question, “How long should I keep the backup copies”? The answer may vary, depending on the exact type of documents ( e.g., tax documents when working in the government sector compared to say, discount flyers, for a local business) you’re storing.

To avoid such unpleasant surprises, we suggest double-checking the retention plan of your data storage solution or requesting technical support at the time of installation.

It’s essential to evaluate the needs of your enterprise correctly; needs like how often a backup should be made, how long it should be kept (the retention plan we described above), and how much space it can occupy on the backup server. Moreover, you also have to estimate the amount of data that the company can reasonably accept to lose after a potential disaster and how much time a company can take to recover data before it starts to harm the work processes of the organization. These can be calculated using the following metrics:

Using these, you can decide what would best match your company’s goals even before actually setting up the data storage solution and backup server. It should be noted that the use of an off-site server as a backup may not let you recover the data as fast as required. To accelerate the recovery process, you might also consider creating a backup on-site.

So, what could happen if you underestimate the workload of your business? Some of our customers recently found out when they had to deal with a lack of backup space for their snapshots, snapshots that they used as their backup. There are several reasons why this can happen:

Generally speaking, overloading a server and running out of storage space isn’t a big deal if you manage to react as soon as it occurs. However, if you miss that moment and the system tries to take another snapshot before the situation is rectified then the snapshot will not be recorded, and the latest changes to your data will not be saved.

With Open-E JovianDSS, you can always be sure that your data and backup are safe. With On- and Off-site Data protection, you can create multiple backup servers locally or even 80 kilometers apart. Additionally, with High Availability you have the option to set up not only an active-passive cluster but also an active-active one. Using this option, you can simultaneously run the system with almost no downtime and eliminate any single points of failure. This provides you with the peace of mind of knowing that as your workday proceeds, your backups will not be interrupted.

Making mistakes is actually generally helpful, as we can learn from them. However, when it comes to data loss, such errors can be downright disastrous (The average amount of reported ransomware transactions per month in 2021 was $102.3 million). If you’d like to know more, come check out our Open-E JovianDSS Storage and RAID Calculator to see the best configuration options for your company and download your free trial today.