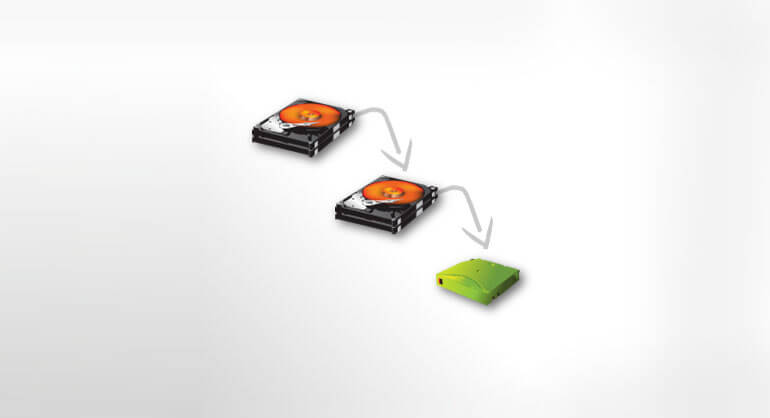 A look at the modern data storage industry can make your head spin. From a variety of hard drives, efficient disk arrays, magnetic tapes, conventional or emulated tape libraries to such miracles of modern technology like RDX formats. It appears that you have a lot of choices – but this can be very misleading, especially when you take a closer look at the very bottom. Then you find out that almost always there is a disk or tape.

Both, the hard disk and magnetic tape, are not the latest technical innovations but devices that dominate the backup storage market from years. However, this does not mean that disk and tape drives are not being improved. They are – following technological advances and almost constantly being enriched with new features.

If you ever wondered, dear reader, which of those drives performs better as storage for backup, you probably came across several compilations, comparisons and articles on this subject. I personally do not treat the disk as a more appropriate medium than tape, or tape as a better medium than disk. I think that choosing a medium for backup is not an easy topic, especially because it is defined by a number of specific requirements. In my opinion it’s a topic for a separate post.

Today I would like to discuss a little less relative subject – simultaneous use of disk and tape for backup implementation. Shortly speaking, disk-to-disk-to-tape.

Disk-to-disk-to-tape or just D2D2T are the most popular names for a backup strategy which stores the same data – on disk and tape. In this strategy, a backup is stored first on a disk and then saved on a magnetic tape. As a result we have two backup copies: one on the disk medium and one on tape medium.

The main goal of the disk-to-disk-to-tape technique is to provide quick access to backup from disks in data restore operation and create a long-lasting backup on tape, which is more solid. Just think how comfortable it is to have your data quickly recovered, e.g. in case of a complete failure of a data server (disaster recovery), and still be sure that if something went wrong during the restoration process, the second copy – together with the data server backup – remain safe in a rack with magnetic tapes.

To sum up, the disk-to-disk-to-tape backup enables quick access to data from a disk medium, and stores exactly the same data on tape. The resulting backup copies on the tape can be easily transported outside the data center to a safe place (so-called off-site backup).

Additionally, each copy is saved first on a disk – thus the second copy, the one that is saved on a tape, is performed without the participation of a backup client. It also allows for one backup to be stored on two media (disk and tape), the data are fully consistent and there is no need to engage the backup client twice; which would disturb the integrity of data and overload network resources and backup windows by a double. What’s more, each backup transfer from disk to tape may not necessarily be implemented immediately after the backup but, for example, in any convenient time when the magnetic tape drive is ready.

The last term that I would like to discuss is data retention, which is the duration of data storage on disks and tapes policy. Usually in the D2D2T technique, the disk stores data for less time than on tape. Therefore, it is possible to fit the data retention policy in such a way that most recent backups will be on disk, while their equivalents together with older copies on tape. This will allow you to immediately access the saved backups from devices with quick access (disks) and safely place backup copies on movable media (tape).

All in all, concluding and finishing the characteristic of D2D2T, I think that this strategy can be applied when there is a need for immediate access to the latest backup copy and when additional durable data storage is required (on tapes) , e.g. outside the base location.