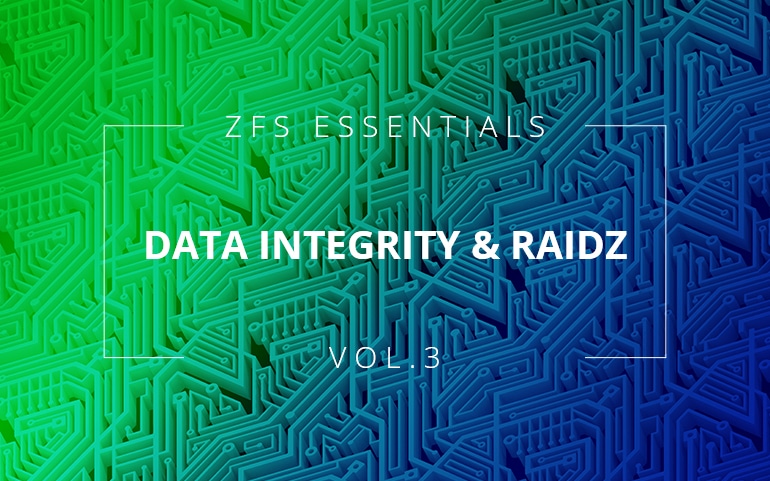 Today we continue the series of articles that aims at presenting the basics of the ZFS. In today’s article we’re further discussing this topic, focusing on the notions of data integrity as well as on the concept of RAID applied in ZFS. Read on and learn!

ZFS is a system that is designed to protect the data against silent data corruption, among others, caused by parity errors, accidental overwrites, disk firmware bugs, phantom writes, and driver errors.

The copy-on-write mechanism that was described in the previous part of series was one of the methods ZFS uses to keep consistent data on the disk. This particular file system ensures to always write the checksum on the disk. Subsequently, when the data is read again, this information is calculated once more. If a mismatch in the checksum is detected, then an attempt will be made to correct the error, provided that the data redundancy is available. This operation is done automatically, without the user’s knowledge.

The data integrity is carried out by using either one of the following on the whole file system tree:

When accessing the block of data or metadata, a checksum of it is calculated and compared with the suggested stored checksum value. If the checksum of the read data matches the checksum of the written data, the information is passed further. In case when the checksums do not match, ZFS will attempt to repair the data provided there is enough redundancy retained for this data, for example, there is a mirror copy of it. If other copies of corrupted data exist, or it is possible to rebuild it using checksums and parity information, the system will attempt to calculate the checksums once more to reproduce the value that was initially expected. ZFS can afterwards use such data to update the damaged resources with functioning copies.

In general, the whole pool can consist of one or several vdevs that are combined in the pool as RAID0 (STRIPE). Each vdev can be built from a single volume, mirror or RAIDZ1, RAIDZ2, or RAIDZ3. The redundancy of the vdevs is important to the pool since losing one vdev leads to the whole zpool being lost. The following image illustrates the RAID levels used in ZFS:

The RAID types are described below:

The data integrity mechanisms as well as RAID levels integrated in the system provide data security capabilities that traditional file system do not possess. Not only you are able to retrieve your data, provided that you have required data redundancy secured but also your system will be well protected against various threats and issues that might result in losing the data.

In case you’ve missed the two previous parts of this article series, you can read them here: