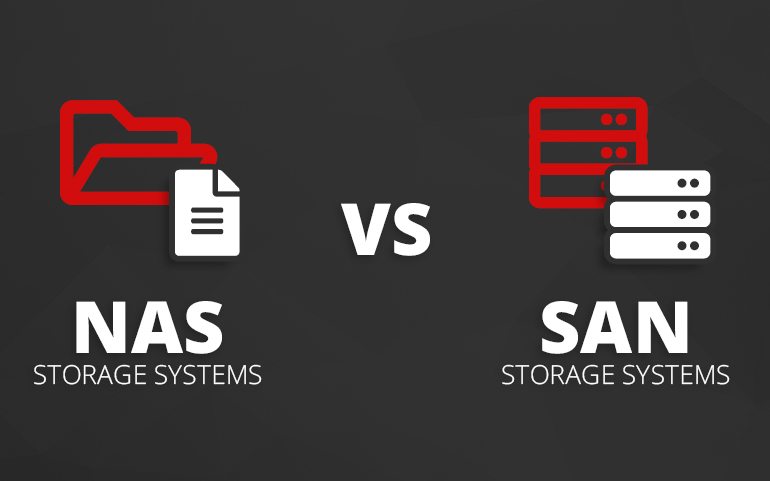 Differences between a NAS and a SAN explained

SAN (Storage Area Networks) and NAS (Network-attached Storage) are both network-based storage solutions. These solutions differ but they serve the same purpose – to keep user data safe and accessible. In this article, we highlight the differences between these two, which might help you choose the proper one for your business or home environment.

In terms of performance, none of these technologies can be called superior, they both provide valuable storage capabilities and each has its own benefits and trade-offs. SAN consists of connected hosts, switches and other devices. Components can be connected with a variety of different block-based protocols. Original transport protocol for SAN is Fiber Channel protocol (FCP) and Fiber Channel over Ethernet (FCoE), which provide a high-speed data transfer mechanism. One of the main things that differ NAS from SAN is the data storage method. SAN stores data at the block level, while NAS accesses data as files. For a client, SAN typically appears as a disk and exists as its own separate network of storage devices, while NAS appears as a file server or a shared drive.

One of the primary strengths of NAS is the simplicity of deployment and usage. As mentioned earlier NAS data lives in shares created on top of data sets (ZFS terminology for NAS volume), instead of blocks. In most cases, NAS volumes appear to the client as network mounted volumes. Multiple users or devices can connect to the same files simultaneously through the usage of TCP/IP (usually) and can effectively communicate with each other. Network file protocols are independent of the client’s operating system and thus, the files can be shared in a heterogeneous network (for example, between Linux, Windows, and MacOS) however, it must support the given protocol.

SAN provides users with shared access to consolidated, block-level data storage, at the same time allowing multiple clients to access files. Blocks of data are stored in Logical Unit Numbers also called LUNs. These LUNs are presented to an initiator (host) from a target (storage system) creating a one-to-one relationship. The usage of block data allows for variation of applications that otherwise would be hard to achieve while using only NAS structure. Due to the possibility of implementation of FC protocols, SAN-based networks are considered to be the best solution for high quality and demanding applications in terms of access speed.

As stated at the beginning of the article, there is no superior storage system, there are only specific applications that would favour either NAS or SAN.
NAS is a perfect choice for archiving and as file storage solution when access to these files over a network is a priority. Network Attached Storage can be used by small and medium-sized businesses with large amounts of multimedia files. In turn, SAN is a perfect solution when working with database systems that require low latency and for resource-hungry applications.