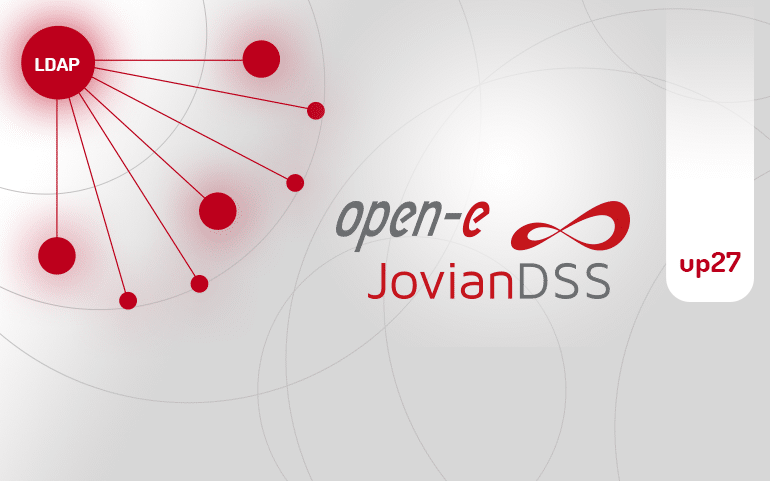 We’d like to officially announce that update 27 of the ZFS-based Open-E JovianDSS is now available. In this article we have collected  detailed information on the new features in our software.

In up27 we included the following new features:

Open-E JovianDSS contains LDAP database. Such database gives users the opportunity to create their own users and groups for SMB protocol directly in the product. Before this update, having  authorization for SMB shares required connecting to the external Windows Active Directory user base.

Option of using NVMe disks to build a Cluster over Ethernet (Metro Cluster) for a significantly better cluster performance, due to robustness of the NVMe drives.

New File-IO mode with write-back and write-through options for iSCSI volumes. The File-IO mode provides much better performance, especially in regards to write-back option as it provides additional data caching layer  in RAM.

Possibility of using a Block-IO mode for Fibre Channel volumes. Until now, the software had only File-IO which means that up27 provides even greater choice and flexibility.

With up 27 it is possible to run the system without ZFS automatic pools import (without the whole storage). This option can be very useful in some emergency situations.

If a server has a Mellanox card, this tool will add information (card stability,  state of the system and processor, firmware update requirements, and other tuning tips)  at system logs download.

Broadcom BCM573xx and Broadcom BCM574xx controllers are fully featured Ethernet LAN controllers for data centers and clouds which enhance efficiency and performance. Such adapters support 100G/50G/40G/25G/10G/1G in single-port configurations, as well as in dual-port ones.

For the full list of new features, updates and fixes, please refer to Release Notes >>