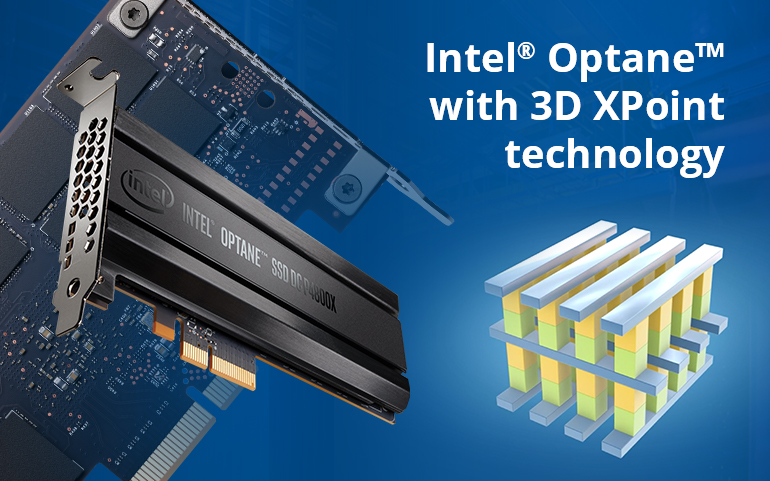 Intel® Optane™ is a line of products based on a 3D XPoint technology that makes it significantly faster than typical NAND-based flash memories in terms of both access times and transfers.

The advantage of 3D XPoint over NAND is mainly based on addressing (for read and write operations) of single cells instead of whole blocks, where, in order to perform a write operation, a whole sequence of read-modify-write operations has to be performed.

3D XPoint technology approach in which the memory cells are addressed individually and there are two physical connections available – one at the top and the other at the bottom of the 3D mesh – results in a technology that is ultra-fast and has benefits such as:

In 3D XPoint, the storage consists of parallel wires referred to as wordlines. Under wordlines, there are bitlines – another parallel wires running perpendicular to the wordlines. Memory cells are located between the points where these lines cross together with selectors that specify whether the cells contain a 1 or 0 value.

Thanks to applying the 3D XPoint technology, the advantages of using Intel® Optane™ SSDs are as follows:

Intel® Optane™ is undoubtedly a great technology that will significantly improve the quality of your storage solution. Since, among others, 3D Xpoint is capable of very high read and write speeds, providing very low latency, as well as high and stable IOPS making Intel® Optane™ the perfect choice for the most demanding data storage environments. Therefore, Open-E JovianDSS with its advanced caching functionality, which is well optimized to work with Intel® Optane™ drives, will meet the expectations of even the most demanding users.