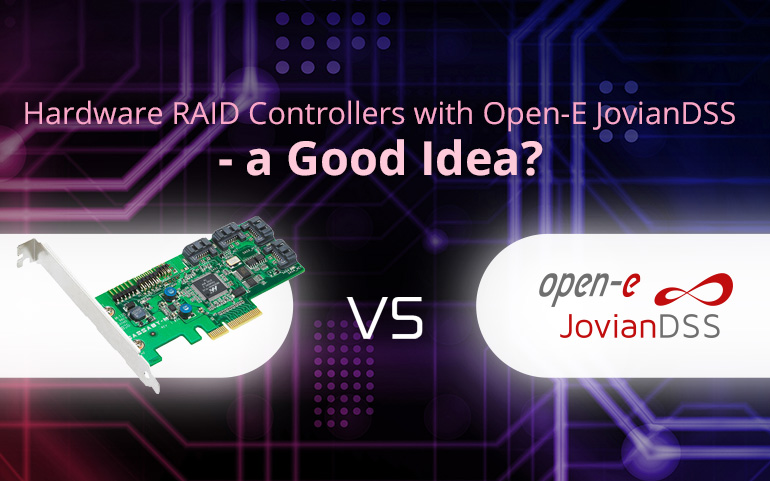 Is it worth using hardware RAID controllers with a ZFS-based Open-E JovianDSS?

Our support experts often hear the question if it’s ok to use RAID controllers with the ZFS-based Open-E JovianDSS data storage appliances. We decided to answer this question in the article to showcase all the pros and cons of different approaches, highlighting the differences between hardware RAID controllers functionality and software RAID (Z-RAID in ZFS) built-in features.

But before we discuss them in detail, we need to clarify the common misunderstanding that says it’s risky to use ZFS with hardware RAID. Using Open-E JovianDSS on top of hardware RAID is perfectly fine and safe, as it’s possible to run ZFS without deploying software RAID features. Most of the functions of Z-RAID, like SMART health monitoring, can be replaced using a hardware RAID controller. ZFS still provides the functionality of a flexible file system and volume manager but with limited access to the data drives. That is why it’s worth considering all the advantages and disadvantages before making a final decision.

First, Open-E JovianDSS gives you great flexibility in terms of system configuration, but you need to learn how to operate the software RAID to utilize all the options fully. Additionally, RAID hardware controllers can have a battery backup, which is not possible using a complete software approach.

Additionally, when using a hardware RAID controller, ZFS may not be able to:

ZFS was created with software RAID in mind, owing to the mindset of its creators, who did not want to rely on any specific hardware solutions to ensure more flexibility to the system.

Although Open-E JovianDSS is ZFS-based, it is a good idea to employ hardware RAID as long as it is correctly configured and offers satisfactory performance and safety.

In other words, it is not an either/or situation but rather a choice of the system administrator, who can customize the storage based on his needs.