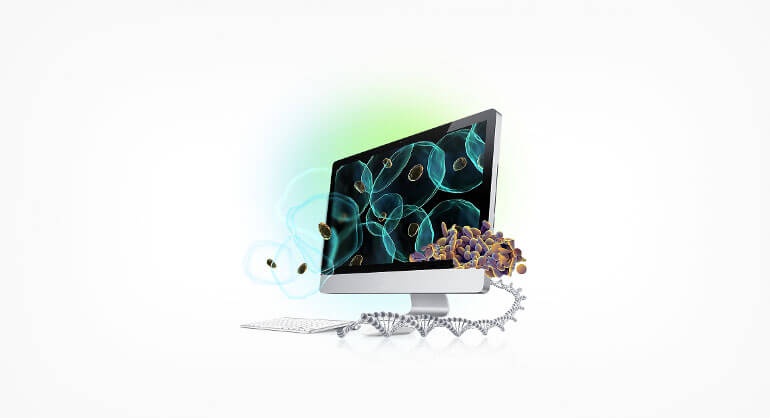 Modern technology – we all know its rules, laws (like Moore’s law), limitations, possibilities and direction of development (well, for the most part). Technology is still evolving… But what if we change the starting point? What if we bet on a revolution, not evolution? What if we stop thinking of computers as silicon-based systems? Let’s discuss the issue of biocomputers and DNA computing.

The evolution of a revolution

Have you ever heard of artificial DNA? How about the idea of using it to store data or perform computational operations? Before we start building castles in the sky, let’s get down to the basics.

An American theoretical computer scientist and professor of computer science and molecular biology. Father of the idea of biocomputers and DNA computing. The author of “Molecular Computation of Solutions To Combinatorial Problems” (1994). He outlined how to use DNA molecules for computing science.

DNA or deoxyribonucleic acid – is a nucleic acid which we can call a “genetic manual” used to develop and manage the functioning of all living organisms (with the exception of RNA viruses… We are unsure about aliens). DNA is a kind of storage for genetic information – genes – which we can define (in laymen’s terms) as “organic data”. What if we were also able to store inorganic data with use of deoxyribonucleic acid – like on a HDD or SSD? Leonard Adleman predicted this in his treatise – “Molecular Computation of Solutions To Combinatorial Problems”

We’ve already heard about scientists from the University in Tojama (vide: “Journal of the American Chemical Society”). They built a DNA helix based on non-biological components. What is more, the helix continues to form a clockwise molecule. This begs the question: “So what?” Well, all this sounds mysterious and incomprehensible until we think about one very special feature of DNA – its amazing storage properties. As is stated in the aforementioned publication, DNA can offer really high stability and unprecedented possibilities for the creation of new biotech materials. Don’t you think it would be a revolution in the storage industry?

The storage possibilities of deoxyribonucleic acid are incredible. It is estimated that 0,5 kg of DNA can hold more data than all of the modern HDDs that are now in use. When we compare computers with silicon-based systems to DNA… There is no comparison.

Let us go further. Let us think of DNA as software and enzymes as hardware – amazing, isn’t it? Although it sounds like a dream, remember that dreams can come true. Some time ago we had the opportunity to read in “Nature” magazine about a nano-computer constructed by scientists from the Weizmann Institute. The most striking information was that the mentioned “machine” had an ability to enter input data and receive output data.

There were also rumors about “Maya-I” and “Maya-II” – biocomputers constructed by scientists from the University of New Mexico and NY Columbia University. Equally interesting was the report (“Science”) about the experiments with biocomputers based on RNA working in yeast cells. Their systems were used to create logic gates performing standard calculations based on logical functions – like conjunction, co-denial, “either-or” and “or”. Amazing!

As is easy to see, the idea of biocomputers and DNA computing is still developing. What’s more, this is a direction we’re heading with no turning back – mainly due to the huge range of applications.

While discussing biocomputers, we are really talking about biologically-derived materials prepared to carry out computational functions. This is a very general statement. For better understanding, it is good to make a distinction between technologies: biochemical, bio-mechanical and bioelectronic computers – to show the wide range of possible ways of development. In the first case we are dealing with biochemical reactions. They may take different forms and can be based on various factors, but it works! Last year we could read in “New Scientist” magazine about Japanese scientists. They taught bacteria to solve simple puzzles. It may sound trivial or funny – bacteria playing Sudoku – but do not judge a book by its cover. However, “programming” bacteria is nothing new and has its limitations (we can store in their genomes only a limited amount of information), think about large structures which would form more powerful and complex structures. Creepy? Yes. Incredible? Definitely!

Biocomputers can also be based on electrical conductivity. They use biomolecules that conduct electricity in highly specific manners based upon the initial conditions that serve as the input of the bioelectronic system (source).

Quite apart from specific divisions, there is one thing we can be certain of; DNA computing is changing the way we think about computers and silicon-based systems. We are dealing here with a kind of matrix with multiple rows of tubes – but in this case DNA is replacing silicon chips. It is not just a milestone for the scientific world, it is a revolution.

Apart from academic parlance, let’s focus on the pragmatic side of this issue. There are many possibilities for the implementation of biocomputers. We can point to medicine. Some scientists claim that soon it will be possible to diagnose the presence of viruses in blood or cancer cells. In fact, it is happening now.

Also, an economic benefit can be taken into account. Imagine storage systems with the ability to self-replicate and self-assemble. Theoretically, such a solution may prove to be highly efficient and inexpensive in relation to non-biological computers and components.

It is still hard to tell the direction of the development of biocomputers. We can only talk about its potential – which is huge – if we take into account the most amazing system ever created: the human brain.

Whatever one thinks about biocomputers, there is still one thing that should always be considered – ethics. DNA computing raises many questions. Should we treat systems based on DNA as live beings? What about the use of artificial helixes? What is the difference between a biocomputer and a human brain? If the difference is determined by ownership of a self-consciousness, should it be considered an “artificial brain” – as a potential carrier of a conscious existence? Is it still an ordinary object, a machine; or is it a person? It is possible that these and other similar questions will become really important issues faced by the storage industry. It may sound a bit abstract or even funny, but what will you do in case of a fatal error in your live server room? “rm -rf /”?