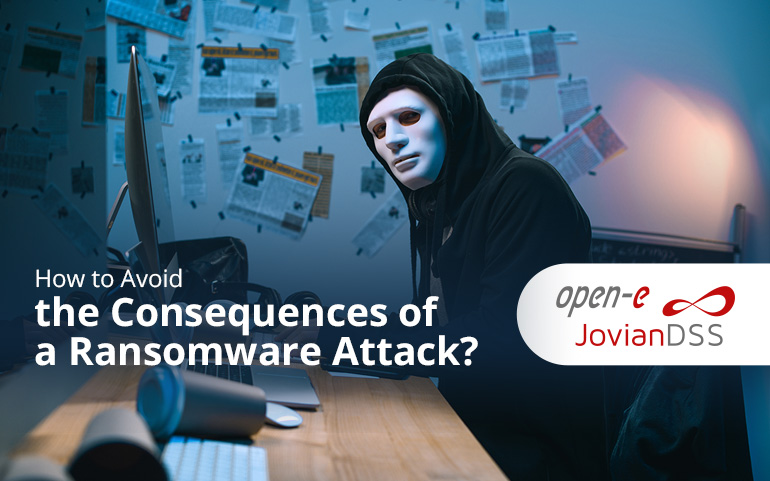 Open-E Pro Tips: How to Avoid the Consequences of a Ransomware Attack?

Terrifying statistics, isn’t it? The topic is not a newbie but is still hot. In this article, we’re sharing some critical data, plus a bunch of tips that might be helpful in minimizing the danger of data loss.

Additionally, the total ransomware payment has risen to an unbelievable number. During Q1 and Q2 2022, it reached more than $925, almost a million dollars in payment! This is a rise of 71% in comparison to the previous year. In 2020 it was about $312,000, while most of the transactions in 2016 did not exceed $500. The increase is just staggering.

What is even worse, Sophos asserted that only 65% of the surveyed organizations were able to restore their data after paying the ransom. So not only do companies face huge financial losses, but on top of that – they are not even guaranteed they’ll recover their mission-critical data after paying this tremendous amount of money.

So, the situation got worse due to COVID-19 and the fact that plenty of organizations have made their way into the home office working model. Home office employees are under siege as they are treated as an easy link to the company’s crucial data and therefore are an easy target because of the widespread lack of home network security – more than half of attacks were caused by simple phishing emails. Sad but true, and honestly – there’s nothing to be ashamed of when it turns out you were attacked – even the biggest corporations also struggle with this phenomenon.

Biggest ransomware attacks in 2022 so far

Let us get four of the most significant attacks in 2022 on record, starting from Nvidia, the biggest microchip provider in the US.

How to avoid a ransomware attack?

Talking about safety measures – there’s no such thing as enough security tips, so we’ve listed some of the cybersecurity must-haves for all to be remembered at all times:

What about safety measures within businesses? Of course, apart from the safety measures listed above, you can, for instance, give users only the bare minimum privileges needed to do their jobs, purchase a cybersecurity insurance policy, invest in file activity monitoring (FAM) solutions, and/or use endpoint detection and response (EDR) and extended detection and response (XDR) tools.

Plus, the most important – train your employees! Provide your staff with cybersecurity workshops, present them with all the benefits of following the proper cyber hygiene and teach them how to detect potential dangers.

Now take a look at the essential tip left for the very end to highlight its importance to the maximum. So ….

BACKUP! BACK UP YOUR DATA!

Always back up your data to external devices or off-site locations. Take backups seriously by not only copying your data daily but also keeping some critical ones in other locations and disconnected from your primary network. This way, they’ll be definitely much less vulnerable to a ransomware attack. Why is external backup so important?

In the unfortunate case of a ransomware attack, decryption is no longer possible. Data backup protects you from the obnoxious consequences of a ransomware attack due to the fact that if you keep a backup in the event of an attack and are still able to prevent the malware from reaching and encrypting it too. This way, companies, and organizations guarantee a safe and easy way to recover the data. Not being forced to pay the ransom.

Handle the worst-case scenario with backups with Open-E JovianDSS

Open-E JovianDSS is a ZFS- and Linux-based data storage software that contains the On- & Off-site Data Protection feature that is designed especially for backup. The feature allows users to back up and restore crucial company data in case of an unexpected disaster by creating consistent read-only snapshots and thanks to asynchronous snapshot replication to local and/or remote locations. Due to the fact that snapshots are read-only and thus cannot be encrypted,  the backup server can stay online all the time. Replication tasks in turn can be well-organized according to advanced retention plans, which control the creation and deletion of snapshots both on the source device and the backup one.

With Open-E JovianDSS On-&Off-site Data Protection, you can create an unlimited number of consistent snapshots of basically everything, including databases or virtual machines with all the applications saved. This feature provides instant access to all data which is a quick way to roll back to the state before a ransomware attack. So, why tempt fate by not having a backup solution if you can rest assured your data is actually safe?

See it yourself – Rollback from WannaCry Ransomware

Want to see how to prevent the ransomware consequences with a single data storage solution? There you go, we’ve prepared a manual of how to do it in just a few simple steps, based on Open-E JovianDSS data storage software.