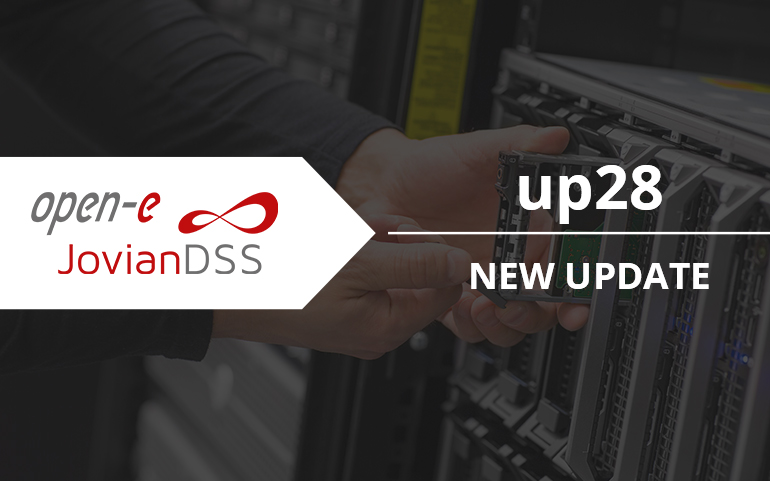 Good news! Fresh from our labs – Open-E JovianDSS update 28 is now available for download. Read the article to learn about the impressive list of new features and fixes that are now included in the software. Download the update and make your daily work with the ZFS- and Linux-based Open-E JovianDSS simpler and more effective than ever.

High Availability clusters in Open-E JovianDSS consist of two nodes (servers).To configure and start a HA cluster, you must connect those nodes to each other. Until now, this connection was available through two network interfaces that were configured and connected by the Active/Backup bonding. With up28, it will be possible to establish this connection in two ways. The first is bonding, as before. The second way is by configuring two independent interfaces (configured on different subnets) and later using them to connect the nodes that should work as an HA cluster.

Custom SSL/TLS certificates can be now manually imported in WebGUI

The WebGUI in Open-E JovianDSS now enables the import of Custom SSL/TLS certificates. Such certificates are being signed by certificate authorities or are self-generated. The file with the private key and a certificate should be indicated in the appropriate places on the form.

A tool for testing storage performance is available in TUI. This tool enables running performance tests on raw devices (physical disks connected to the server) or on zvols. The prepared profiles allow for sequential write/read as well as random write/read testing.

HPE Tools in Open-E JovianDSS enable an easy management of the HPSmart Array series in the software WebGUI.

This functionality enables a quick file as well as file content search on MacOS.

During the Open-E JovianDSS installation process, partition of bigger size (now 128GB) is created which provides more space for storing several versions of the system.

There is a bar on the Open-E JovianDSS WebGUI which enables filtering messages displayed by the EventViewer. Users can filter the messages by checking one or more options, e.g.”Show errors”, “Show warnings”, “Show information”. Also, it is possible to define the date range so that only messages from a specific period of time are being displayed.

Kdump is a feature in the Linux kernel that creates crash dumps in the event of a kernel crash. In such a case, it launches dump-capture kernel that allows a user to save logs which otherwise would be lost. It’s a new feature expanding debugging and analysis facility.

Deduplication statistics for zpool are available in WebGUI

The system logs downloaded from Open-E JovianDSS contain detailed statistics for network cards, for example the amount of data sent and received via a specific network interface.

In the current version of the JovianDSS system, the Diagnostics -> Disks usage tab also displays statistics for MPIO devices. Previously, only statistics for individual devices (hard drives) were displayed.

Thanks to Checkmk, users can now monitor the hard disks performance more effeciently and accurately through read and through analyzing additional data from the S.M.A.R.T system, as well as thanks to the iostat commands.

Apart from this huge bunch of novelties, you’ll also benefit from the range of other updates. Find a list of what’s been updated and upgraded: