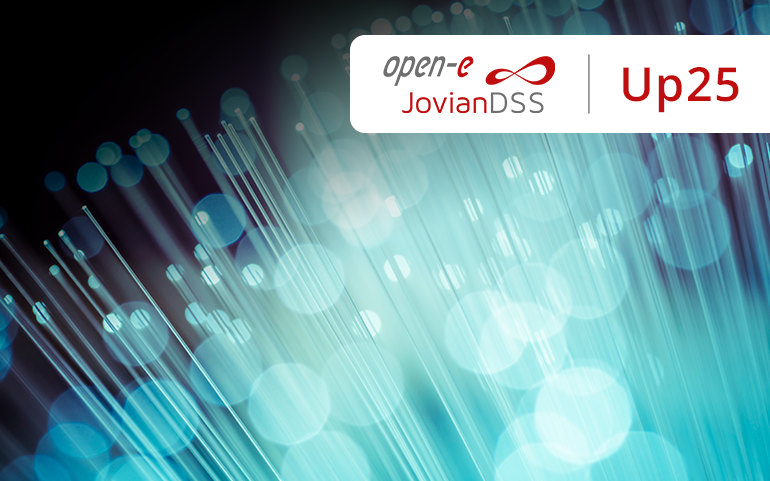 Software Update: Get Open-E JovianDSS up25

The new update 25 for the ZFS-based Open-E JovianDSS has just been released and is now available on our webiste for download. Read this article to learn about the included features and download the update to benefit from some advanced and brand-new functionalities.

In Open-E JovianDSS update 25, our developers have added a set of functionalities and improvements:

Fibre Channel (FC) is a popular type of connection for high performance SAN Enterprise storage that provides the best throughput and low latency. It enables avoiding collisions and congestion, plus it allows a bigger saturation of the Fibre Channel connection. Open-E JovianDSS used to support the Fibre Channel technology as an Initiator, so that users can connect external FC devices. With up25 it is also possible as a Target, so that you can serve virtual volumes over the FC protocol.  Find more information in the Solution Article or download the handy brochure >>

This includes configuration facilities for On- and Off-site Data Protection feature regarding nodes in the High Availability cluster. This means that users do not have to repeat the processing of the same data during the configuration as they are automatically propagated to the second node of the cluster.

This offers the possibility to import a pool with a damaged fragment of data. In case of an error e.g. if the last data are not saved from the memory to the disk, such a pool can still be imported.

This functionality allows for a more detailed designation of Open-E JovianDSS’s behavior in case of emergency situations, e.g. suspension of some processes for a longer period of time. These options are available in both GUI and in TUI.

– Automatic clearing of errors on disks after resilvering

Resilvering is the process of repairing the data structure in the ZFS system. Now, after resilvering the error counter is deleted in the GUI.

With this, an additional clustering mechanism has been added that allows an even faster and more efficient response to any type of the system’s stability issues. Thanks to this feature an unstable node is immediately being disabled and the second node takes over its resources as soon as an issue occurs.

There is now support in the system (kernel) for a better cooperation of processors in multiprocessor environments. This improvement results in a better efficiency of the entire system.

Virtual LAN networks are now supported. This allows users to separate some services (iSCSI disks, SMB shares and NFS shares) from each other so they don’t affect each other in any way, e.g. they don’t take over any transfer or don’t block each other simultaneously in case any of them fails, etc.

For the complete list of features, updates and fixes read the Release Notes >>