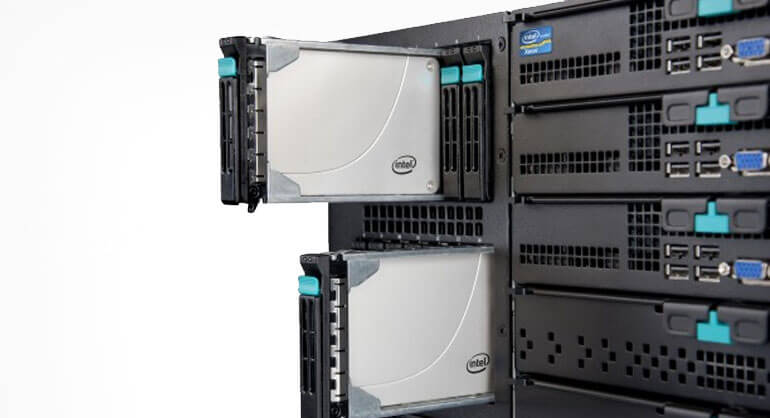 To use or not to use SSDs? That is the admins question!

It’s quicker, it’s lighter, it does not generate any noise and has a lower work temperature…Furthermore, it doesn’t have any mechanical, moving components so it offers you not only a very short response time but also great resistance to any shocks. So isn’t SSD the answer to all our storage needs that we were waiting for? So why should we even consider using SSD if the advantages over traditional, magnetic hard drives are so obvious?

Yes, we all know why…it’s because of the PRICE! Unfortunately this is still the main reason why we all give up on using the SSD disks despite the benefits they bring –  the comparable capacity we can get in HDD for significantly less money. This price gap is still noticeable although the surging prices for hard drives caused by the massive flooding in Thailand which devastated much of the industrial area where about 40% of the world’s supply of hard drives are manufactured (according to market researcher IDC Corp.). This cost factor is the reason why this great technology has not yet conquered the market and…of course the server rooms, as it was expected at its premiere in 2007. But even the prices pale into insignificance if the fast processing of thousands of queries to large databases simultaneously becomes a crucial way for the effective functioning of a company.

SSDs are at their most useful wherever random access is required more than a sequential access. Its memory modules can read and write data almost without any delay. Just think that in SSD access data occurs in about 0.1 milliseconds! While the traditional mechanical drive system must first set the read/write head, then go over to the place in which it has to read or write something. So, for a hard disk it can take from about 3 to even 15 milliseconds. It means that using SSDs can improve average access time from 30 up to 150 times! Furthermore, the latest SSD models are characterized by high endurance and can achieve much higher transfer speeds than hard drives. They can transmit up to 1 GB of data per second!
Their resilience to shocks and less sensitivity to impact is also worth the money. Because even slight shakes in the drive head in traditional magnetic disks when retrieving data may interrupt transmission, cause damage to magnetic disks, and thus even the permanent loss of data. So everything that we would prefer to avoid… But one of the most important and convincing arguments for investment in SSD is the fact that their memory modules consume far less energy than the electric motors that drive heads in HDDs what in the long run may bring real cost savings to your company. For portable computers it also means a much longer battery life. But most of all SSDs don’t heat up as much, so you will consume much less electricity to keep them cool. You and rest of the company team will also appreciate that thanks to the lack of mechanical parts SSD generate less operating noise – in fact we can even say that they work soundlessly. Can you imagine that? A quite server room? And finally, SSDs don’t need any maintenance. So yes, surely we can all agree that SSDs will fully meet its mission in server rooms… but only when the costs are a secondary issue. Most companies, however do not have such a comfortable situation, that is why the comparison of the capacity and TCO still effectively disqualifies the use of SSDs in most data centers, despite the obvious benefits.

So how we can reject the opportunity to gain higher reliability, faster data access and less power usage?

Well, fortunately there are some compromise solutions, maybe not as cheap as we’d like them to be, but they will not ruin your company’s budget. If you don’t want to give up the opportunity to increase the performance of your storage you may consider some affordable, mixed solutions. You can for example build a RAID both from SSDs disks and HDDs which will allow you to gain at the same time the benefits of these two worlds – the great speed of Solid State Drives supported by the capacity of Hard Drives. In this case you would simply create one volume group with two units – where the first unit with HDDs will be responsible for storing data and the second unit with the SDDs will be liable for the performance.

Another solution to reach satisfactory performance, responsiveness and reliability is to use a RAID card with SSD caching support. That kind of solution is delivered by Adaptec within the MaxIQ SSD Cache Performance or by LSI with MegaRAID CacheCade or with Intel RAID SSD Cache with FastPath* I/O.These solutions simply assist in maximizing both the read and write performances and will efficiently host more users at the same time while reducing the need for additional equipment. Thanks to the “hot spot” detection algorithm, all the files that require frequent access are automatically identified and assigned to the SSD cache. This sophisticated mechanism quickly recognizes the probability that a specific data block may soon be accessed and then just move it into the SSD cache area. The SSD cache automatically displaces “cold” data by the frequently accessed files. That means that the so-called hot data are quickly written and read which significantly reduces I/O latency. In this case you should simply create one unit with HDD and SSD and make them work together like a hybrid.

Producers claim that thanks to their SSD cashing solutions the I/O performance can be faster by three, or even up to eight times in comparison with RAID array based only on HDD. Pretty impressive, don’t you think? And also keep in mind that it will have the additional green and financial benefits from servers being used faster and more efficiently — servers consume less power in data processing and they don’t need to be cooled down so much. So maybe the compromise solutions are the optimal solutions? What is your opinion on this matter?

Trademarks: The names of actual companies and products mentioned herein may be the trademarks of their respective owners.