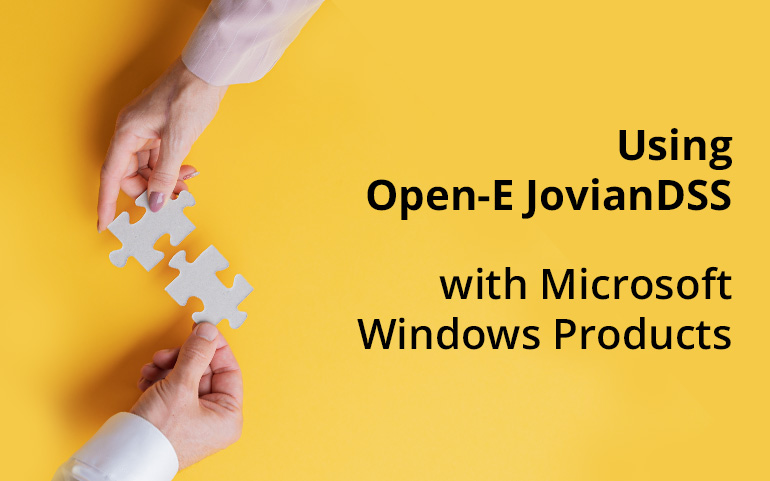 Microsoft is a name that everyone in the tech world and most regular people are familiar with. It makes one of the world’s premier operating systems, Windows, and has a large global following. But for most IT administrators, it’s not so much the Windows OS that brings about so much enthusiasm (or frustration) for Microsoft as another of their products. That product is called Windows Server and, as you can imagine, it’s like a twin of the consumer-based OS but with a special focus on servers.

Speaking of features that Microsoft could improve on, Windows Server hasn’t always been released with the most reliable or feature-rich data storage solutions on the market, and we definitely feel like the ZFS-based Open-E JovianDSS could improve Windows environment including Windows Server by providing a rock-solid base on which to base your data storage needs on. Open-E JovianDSS is a trusted, proven, award-winning product that has years of real use in the data storage market behind it that shows that it just always works, something that’s pretty key for a data storage solution, and it synergizes well with Windows Server. It synergizes well due to several key features such as support, improved security, and performance. In this article, we’ll discuss two use scenarios of how Microsoft Windows products can be used with Open-E JovianDSS: as NAS and SAN. This way, you can choose the ideal use case for your infrastructure.

The primary specification to be mentioned when discussing Open-E JovianDSS as network-attached storage in combination with Microsoft Windows is that the connection is performed through SMB protocol. What are the possible functionalities in such a data storage solution? Have a look:

As to server-side copy offloading, this feature can provide you with significant gains in performance as it makes it possible to avoid the file data having to go through the network every time you copy or move data due to the core actions happening server-side and not client-side. This lack of delay significantly improves performance over time and can lead to great overall gains. Open-E JovianDSS provides this feature.

ACL, or Access Control Lists, are literally the “bodyguards” of all the data that is stored on your server that can be connected to your network. This list sorts the permissions to, as you can guess, access anything by a specific user or a group of such users. This way, Windows gives and enforces privileges and Open-E JovianDSS supports them.

It is an advanced technology that helps the operating system to reveal the unused data block that can be erased. This feature helps to improve the allocation process and releases the block space that was recently cleared. This way, such an SSD disk does not overload and may live longer.

Regarding the ACLs, they require users and groups to be defined commonly to the whole Windows environment. In order to achieve this, there is a need for a database. For example, Open-E JovianDSS supports two configurations:

From this moment, you can probably indicate the key features of such configuration yourself: Open-E JovianDSS as network-attached storage, to which, for example, Windows workstations connect, and working on the base of built-in LDAP (Lightweight Directory Access Protocol) server. In order to understand this configuration, let us have a look at the definition of this particular protocol. LDAP is an open vendor-neutral (which makes it compatible with macOS and Linux as well) application protocol that works on the basis of IPs. In the case of smaller data storage configurations on the base of Open-E JovianDSS which don’t include MS AD (we will describe such configurations below), a lightweight directory access protocol can be the best solution for the ACL. The database of all the users and groups is being kept in Open-E JovianDSS, making the software solution in charge of any authentication command performed. Additionally, if one has an Open-E JovianDSS cluster configuration, each node will have its database, which will be synchronized between the nodes.

An alternative configuration to the one we have described above is the one that combines Windows Workstations and additional Microsoft products – Microsoft Active Directory Domain Services. The latter indicates the difference in the configuration’s structure as it is used in a more complex configuration of a server (or servers) than it could be in Open-EJovianDSS’s LDAP. This way, the database we have already mentioned before is kept in the MS AD, and Open-E JovianDSS works as a fusion with Active Directory configurations.

The aspects we’ve listed above mean that Open-E JovianDSS and Microsoft Products’ configuration working on the base of MS AD will differ from the LDAP with the particular operating system’s connections and the system’s structure complexity.

Compared to the NAS configuration, when utilizing Open-E JovianDSS as a storage area network, the connection is performed via iSCSI or Fibre Channel. Thanks to it, such a structure includes a wider variety of possible setups compared to SMB. In addition, being a block protocol and with iSCSI or FC behaving like ordinary disks, SAN is formatted with the native Windows filesystem (and not ZFS as in the configurations above).

Also, there is an additional feature that appears in SAN:

It is a bit the same as the Trim feature we’ve discussed before, however, reclaim is working on a completely different level than the disk. In short, it’s the ability to get the space that you allocated using thin provisioning back. Why is this important? It allows you to control exactly how much of your disk space is needed to do whatever you need to do. Better control generally speaking means improved performance and more optimization. This is also great when dealing with virtualization as it gives you more options as to how many virtual machines to create and the peace of mind that if anything changes, you can quickly adapt to the situation.

Well, the title already describes this setup quite fully. Open-E JovianDSS is connected to a Windows Server with the use of iSCSI or FC. However, there is an additional characteristic which can make this setup so special: it supports Windows Servers, including database servers, Hyper-V, etc. Open-E JovianDSS fully supports Hyper-V, ensuring the best performance experience. As such, if you’re looking to create a fully functioning, stable virtual machine environment with everything from the base data storage solution to the hypervisor already being guaranteed to work (and work together), combining Hyper-V Server and Open-E JovianDSS seems like a pretty obvious conclusion. And with the current issues in the global market regarding hardware shortages, there’s very little downside to maximizing your current hardware’s potential and getting on the virtualization bandwagon.

Let’s spice up the complexity of the previous SAN configuration and add another Windows server, and create a High Availability connection to the existing one. In this case, we can benefit from an additional feature that improves the security: persistent reservation.

If we look at the example of the configuration with two Open-E JovianDSS nodes with a High Availability connection. In such circumstances, both nodes will be connected via iSCSI or FB to both Windows Servers criss-cross, providing you with the additional Persistent Reservation synchronization.

There are a lot of different options out there when it comes to choosing a setup, each with its own ups and downs. That being said, certain combinations definitely fit better together than others. Open-E JovianDSS and Microsoft products definitely have a lot of synergies while complementing each other in terms of what each does very well. This is definitely a strong setup that will serve anyone who wants to invest in setting it up quite well, whether they’re looking to focus on virtualization, improve their performance or just have a bit of an extra guarantee regarding their data security. So what do you think about Open-E JovianDSS being used in conjunction with Windows Server? Is it a good idea? Have you tried it? Would you recommend it? As always, let us know, in the comments below!