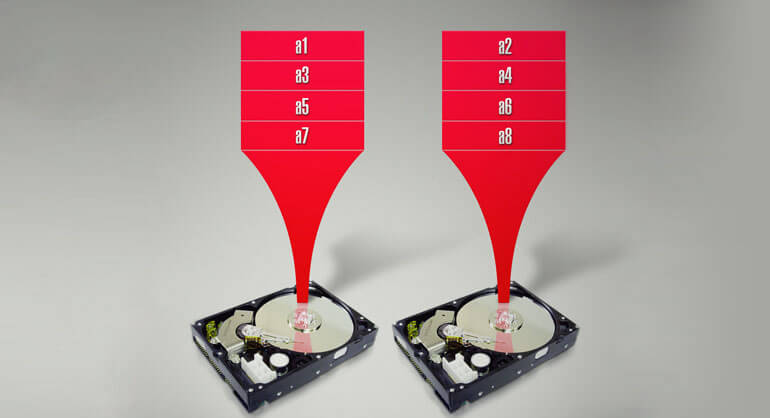 We can describe RAID 0 as a connection of two (or more) physical discs – so as to appear as one logical drive.  In such a case, the whole capacity is equal to the number of discs multiplied by the capacity of the “smallest” one. i.e.- If we have two HDDs – 250GB and 500GB, the size of the array will be equal to 500GB.

RAID 0 is also called a “stripe set” or a “striped volume”. This is because data is split (striped) between discs – without parity information for redundancy.  In other words, RAID 0 does not provide data redundancy.  Inter-leveling of data between the disks causes a significant acceleration of read and write operations – due to the paralleling of these operations on all the discs in the array.

The capacity of the whole array is seen as a whole. By implementing such a solution, it is also possible to increase the read and write speed (but only compared to a single disk).

When we talk about RAID 0, it’s also necessary to write about the drawbacks.  First is the issue of data safety.  Such a method is not designed for data loss prevention. It means that the failure of one disc may cause the loss of all data contained in the array. Moreover, data recovery can be difficult because it’s distributed across all discs. It is also impossible to recover “striped” data. Even when using special (and costly) tools, the recovered data can be incomplete and corrupt.

The second thing is capacity. Even if two discs are used – 100 GB and 1TB – the array storage will equal 200GB.  So the use of disks with different capacities is uneconomical because of the inability to use their full storage potential.

When RAID 0 is useful

Because the only benefit of RAID 0 is its write/read speed, we can point to only one rational use for it – to build cheap and efficient arrays and use solutions based on the RAID 1+0 or RAID 0+1.  Check this out for RAID 1, RAID 0+1 and RAID 1+0 solutions.

We know that your data is priceless – calculate how many disks you need to get it safe!