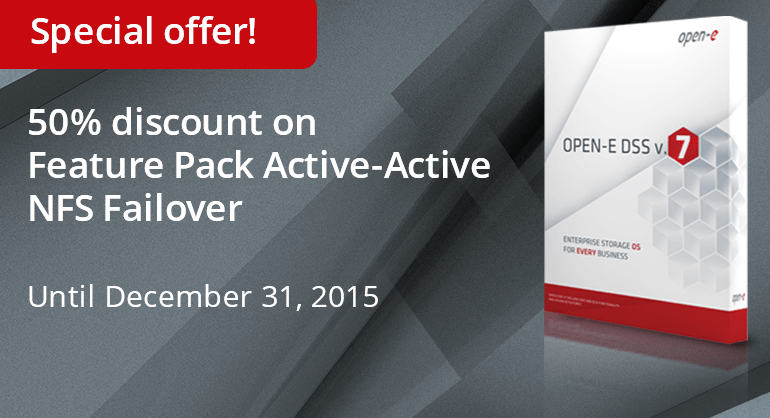 To let our users fully experience the updated version of Open-E DSS V7, our team prepared a great promotion. Until December 31st, 2015, you can purchase our High Availability feature pack Active-Active NAS (NFS) Failover for half the price! This is a great opportunity for those of you who want to improve storage performance and fully utilize cluster capacity.

Any server can crash – that’s why Open-E DSS V7 is able work with a second node. It keeps data redundant and when aware of the original node’s failure, the redundant node continues serving clients; effectively replacing the missing node. Clustered NAS is a very scalable storage solution with the ability to increase throughput, IOPS or disk space.

The Active-Active NAS cluster in Open-E DSS V7 provides you with a set of advantages which will make your work with data management even more efficient, including: The Feature Pack enables you to use Open-E DSS V7 in an active-active cluster setup with NFS. This is a one time deal only. Get yours while it lasts. To order or for more information, please contact an Open-E Partner in your area.