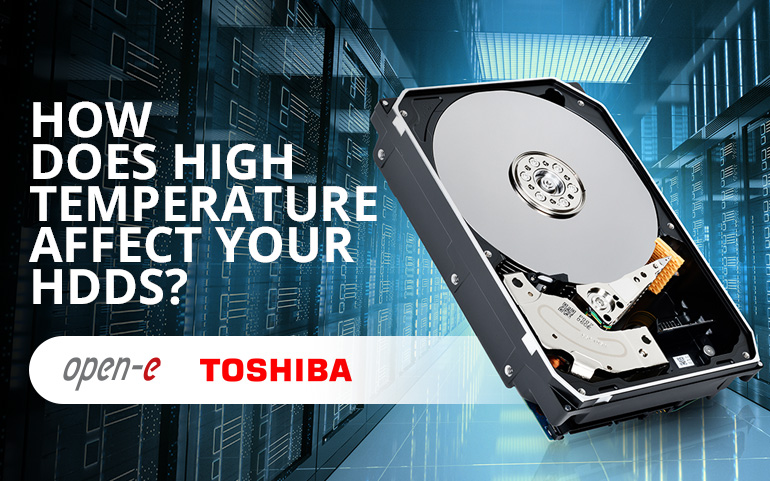 How Does High Temperature Affect Your HDDs?

The internal temperature of a hard drive is an important factor not only in its correct functioning but also when it comes to the reliability and lifetime of a storage system. The mechanical components of the hard disk drive, especially the fluid-dynamic bearing of the platter-stack spindle, wear out faster at higher temperatures as the fluid oil leaks out at a faster rate.

So, controlling the temperature of hard drives in storage systems is necessary to ensure optimal functionality and high reliability.

How to measure the hard drive temperature

Modern hard drives have a built-in internal temperature sensor, which can be read via the S.M.A.R.T parameter, by tools within the operating system, or by the management tools of the host bus adapter or RAID controller.

By expanding controller-, enclosure-, and port-view, the connected hard disk drives are listed and temperature is displayed.

On the operating system level, smart values can be read out with “smartmontools”, a common freeware tool available for windows and Linux. Command-line is: 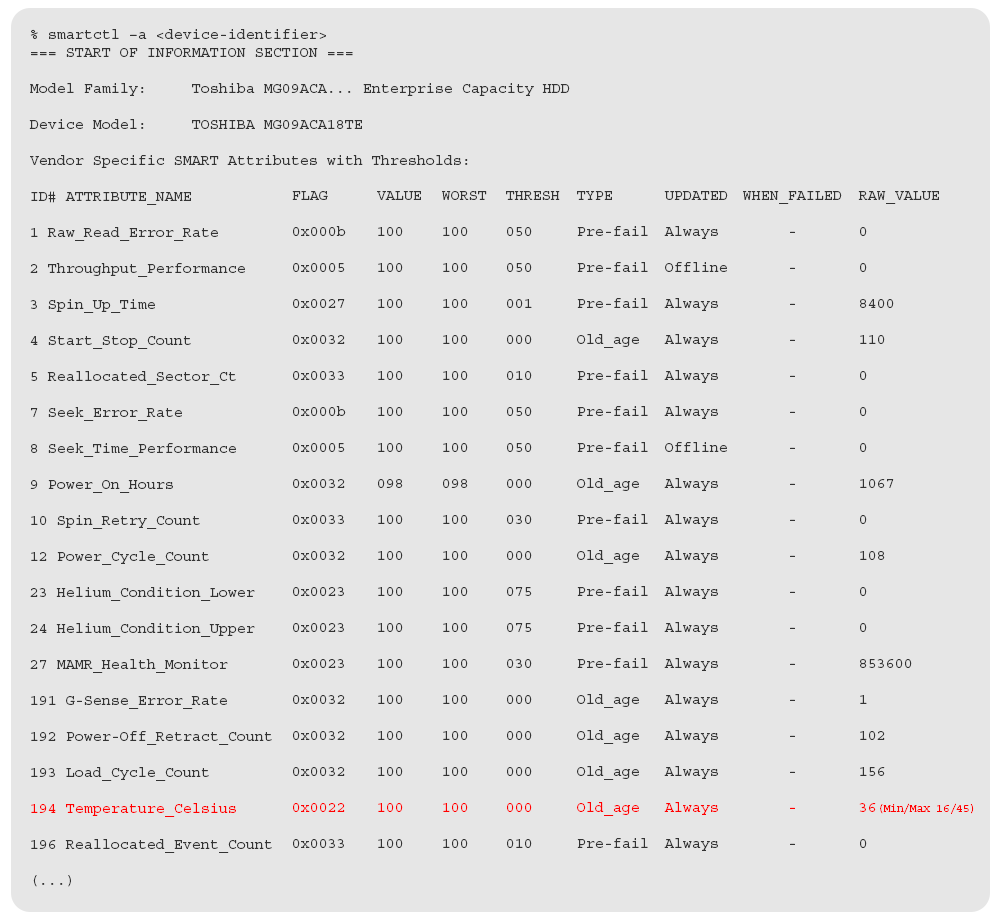 For this example, the hard disk drive’s internal temperature is currently 36 °C. The initial starting temperature was 16 °C and its historic maximum was 45 °C.

Temperature is too high?

The manufacturer specifies the correct functionality of a hard disk drive within a certain range. When specifically looking at Enterprise HDDs, a controlled data center-type of cooling is assumed, hence they are usually specified to operate from 5 to 60 °C, with an ambient temperature of max. 55 °C. NAS drives are specified from 5 to 65 °C and surveillance-specific models from 0-70 °C (it’s because surveillance systems may operate in less stable environments).

A typical enterprise hard drive is rated with an MTTF of 2 Mio. hours. MTTF can be translated into an “annualized failure rate” (AFR) using the following formula:

This exponential formula assumes that the already failed drives have to be considered when calculating the failure rate for the remaining drives. With low failure rates, the formula can be simplified to:

But this MTTF/AFR commitment of the HDD manufacturer is restricted to certain conditions, which are:

If any of these conditions are violated, the hard drive may not fail straight away. Specifically, the workload limitation is not meant in the same way as endurance when referring to SSD write endurance (where a violation would always result in a failure of a component). For a hard drive operating beyond these limits, AFR (annual failure rate) would slowly increase, depending on the level of the violation. The same can be applied when considering a hard drive usage after 5 years of warranted service lifetime – a massive fail should not necessarily be expected, but over time, higher yearly failure rates exceeding a level of 4-5 parts out of 1000 could be experienced outside of the first 5 years.

As for installation in data centers, well-designed thermal servers and JBODs keep the hard drive at a maximum of +10..+15 °C over air inlet temperature. So, air inlet temperatures that are lower than 20 °C will support proper hard drive operations, even if they are stacked in a rear position of a large 4U top-loader JBOD or server.

In such cases where there is a sustained higher HDD temperature of 15 °C over ambient/air-inlet temperature, something is fundamentally wrong in the thermal design of the system. You should check the airflow/fan operation and analyze the system for potential blockages of the airflow.

For correct functioning and the highest possible reliability, it is important to observe the temperature of the hard disk drive in operation. Maximum temperatures of 60 °C and more should be avoided by all means, and the average temperature should ideally not exceed 40 °C.

Rainer Kaese has been with Toshiba for almost 30 years. He initially specialized in application specific ICs, managing the ASIC Design Center, and later the Business Development Team for ASIC- and Foundry Products. He is currently responsible for the introduction of Toshiba’s Enterprise HDD products into Datacenters, Cloud Computing and Enterprise applications.