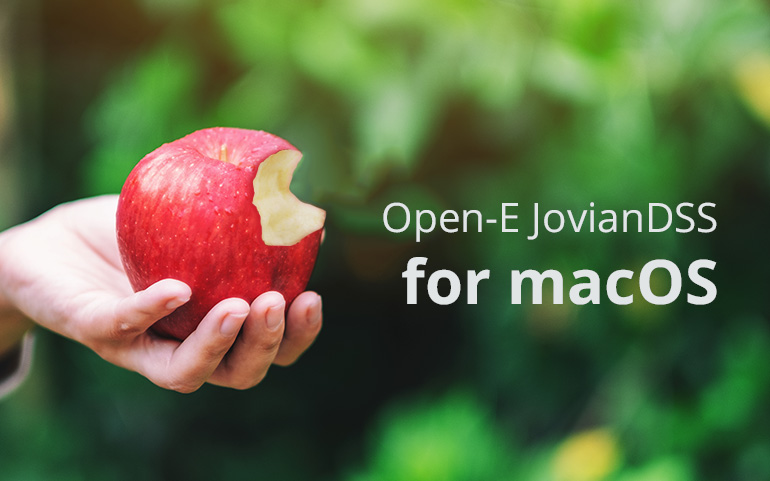 Does Open-E JovianDSS go with macOS like apples and oranges or apples and pie? We do an assessment to find out.

As with any good assessment, we start with a bit of background. Fans of Apple products will instantly recognize Mac’s iconic apple as they boot up a macOS system these days but it wasn’t always so. See, the macOS has actually been around for quite a while, first being created in 2001 before the iconic Apple was all that iconic. Fun fact, this means that Open-E is just slightly older than the macOS. Now, back to the background, and it’s here where we first see the brilliance of Mac in action. Since 2001, they’ve been working on creating a seamless environment where laptops, desktops, mobile, and OSes could interact with each other without any problems and they now have the premier integrated environment with everything running on one OS and compatible.

But, does this then mean that there’s no room in this Apple-only ecosphere for a product like Open-E JovianDSS? We’d argue, no, no it does not, and here’s why.

In terms of the ideal setup for combining macOS with Open-E JovianDSS, it’d basically be any time where the macOS allows you to do something that Windows and Linux simply do not let you do or where it just excessively outperforms the other operating systems. Examples of this can be found with apps like Final Cut Pro X which are exclusive to Apple and provide a level of value that can’t, at least currently, be matched by either Windows or Linux.

The fact is that there is a fair number of Mac-exclusive applications that organizations and businesses have to use day-in and day-out that rely on Apple programs. This is particularly true in certain industries that rely heavily on graphical design applications and other programs that are typically used in the creation of movies, films, advertisements, and other creative-type endeavors. It’s in these types of environments that Open-E JovianDSS truly shines as it works to protect all these creative works while not interfering with the creation process due to excellent compatibility with macOS.

Let’s start with the first one, the multitudes of SMB support offered by Open-E JovianDSS. For example, in order to enhance the compatibility with macOS products, one can switch on a special option in your Open-E JovianDSS GUI in SMB protocol setup for OS X and resolve the most common challenges regarding access to the same set of data from OS X clients via SMB, such as file or record locking, encoding quirks introduced by Apple and access to Finder metadata and numerous resource forks.

With Open-E JovianDSS priding itself on being hardware-agnostic and offering support for a wide variety of setups and connections, it’s no surprise that its assortment also includes compatible hardware and SMB connection, which makes it fully compatible with the macOS (e.g. Broadcom NetXtreme BCM5701 Gigabit Ethernet or Thunderbolt to Gigabit Ethernet Adapter). This is a massive boon given that oftentimes Mac support is harder to come by than, say, Windows support.

The second boon for Open-E JovianDSS when it comes to combining it with the macOS is its support of Spotlight. For those that don’t know, Spotlight is Apple’s search feature on its desktops. This feature is excellent as it allows for the sorting and finding of anything on your desktop in mere moments. When you combine this with Open-E JovianDSS’ ZFS-based file system, a system that supports Spotlight, you can almost instantly find and have access to whatever you’re looking for.

We are currently working on the implementation of the third big boon for Open-E JovianDSS: the support of macOS’ Time Machine. Time Machine is basically a macOS’ system of backups and data retrieval should something go wrong. It will become some kind of expansion in the abilities for the backup with the Open-E JovianDSS and MacOS alliance that we will have. Thanks to the SMB protocol, one can set the Open-E JovianDSS (while working as an LDAP database) as the complementary backup to the original iCloud.

There are also some smaller upsides like, for instance, MobiosPlus. This app lets you monitor your system by connecting your iPhone straight to your Nagios monitoring system letting you track your Open-E JovianDSS. Great for those times when you’re on the go.

So these are the big reasons why we think that macOS and Open-E JovianDSS go together like apple and pie as opposed to apples and oranges. Now it’s your turn to tell us what you think, does macOS and Open-E JovianDSS make for a good pairing? Is there any other massive boon that having both of them working together provides? Do apples and oranges go really well together destroying our entire analogy? Let us know, in the comments below!