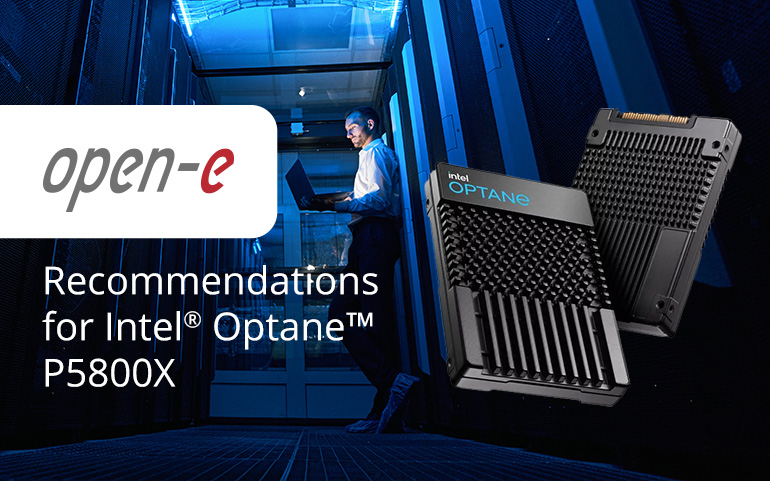 Three variants of the Intel® Optane™ P5800X have now been certified to work with Open-E JovianDSS:

What the tests did find is that the Intel® Optane™ P5800X, regardless of capacity, showed excellent read/write performance (in both random and sequential operations), had very low latency across the board and had suitable durability to perform very well in each of the roles that Open-E engineers suggested it’d be used for.

Needless to say, given their performance in testing, each was certified to work with Open-E JovianDSS ensuring that Open-E JovianDSS remains an ideal option in cutting-edge data storage solutions.

Going further in depth regarding the Intel® Optane™ P5800X 400GB, we found that it made for an excellent write log for HDDs as it had an amazing performance, low latency, very high endurance, and just the right amount of capacity for it to both do the job and be cost-efficient. As such, there are no real downsides to getting this disk for that particular role.

The Intel® Optane™ P5800X 400GB is also suited to other roles, like being a write log for TLC NAND data disks and QLC NAND data disks, with its ability to offer generally lower latency, greater performance, and more endurance when compared to a setup without a write log. However, it’s only suitable in those roles if it boosts the performance of the specific drives that are used in the setup and, as such, we’d suggest not prioritizing it in those roles unless it can be tested and proven to do so before it’s introduced into the live production setup. This is most often true when using SSDs with lower technical parameters than those found in top-of-the-line setups.

As for the Intel® Optane™ P5800X 800GB, we’d suggest using it as a read cache for HDD data disks. During our testing, the solution with the Intel® Optane™ P5800X 800GB as a read cache showed both much higher performance and lower latency than the solution without it. When we combine that with the fact that it has a good level of endurance and great value for money, there are really very few downsides to using it in this role.

The Intel® Optane™ P5800X 800GB can also be used as a write log for HDDs, QLC NAND data disks, and TLC NAND data disks under certain conditions but the Intel® Optane™ P5800X 400GB tends to be better in that role for HDD setups as the 800GB is a bit more than needed in most of those setups. However, it can be very efficient in setups that particularly require higher levels of write performance due to its greater durability.

Lastly, let’s discuss the Intel® Optane™ P5800X 1.6TB. This disk has the same performance standards, i.e. it performs fantastically well, as the other Intel® Optane™ disks. It performs particularly well as a read cache where it can boost the performance of a storage solution significantly.

That being said, the Intel® Optane™ P5800X 1.6TB has 1.6TB worth of capacity. While this is amazing, it should be used in solutions that can maximize this capacity.

In summary, we’ve tested all the different Intel® Optane™ P5800X drives and they’ve performed very well in most of our tests. However, certain sizes definitely showcased their strengths in certain roles and as such, we’d like to suggest that they be used in the roles where they’ve performed the strongest. So what do you think, are the Intel® Optane™ P5800X disks good value for money? In what roles? Would you recommend something else instead? Let us know in the comments below! As this is part of a series, we’d also suggest that you check out our findings on the Intel® Optane™ P1600X and the Intel D7-P5510 if you’d like to know more about our latest certified disks. These will be published soon, so stay tuned!