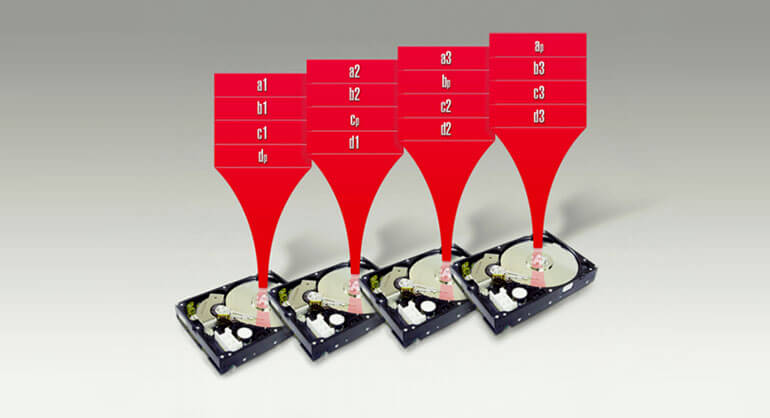 RAID 5? RAID 6? Or Another AltErnativEE?

Here we are again with the next part of our RAID series. This time we’ll be taking a look at RAID 5, RAID 6, and two alternatives – RAID 5E and 5EE. Let’s begin…

RAID 5, The Most Popular RAID

RAID 5 is one of the most popular implementations of RAID. It works in almost the same way as RAID 4 but with one key difference. That being, the parity bits are not recorded on a specifically prepared disk but rather, dispersed throughout the matrix structure. So what does this mean in case of a failure? Well, for one, it’s much easier to recover the data should one disk fail. The read speed is also much higher (in comparison to RAID 0).

However, as is typically the case with most things, there are also some drawbacks. For instance, the necessity of calculating checksums causes a lower write speed. RAID 5 can also prove to be quite expensive should an array reconstruction be needed, such as if one of the disks has to be replaced after failure. Read and write operations will also slow down in these situations due to the need to calculate checksums.

That being said, RAID 5 is the best solution if we’re talking about data safety. Should there ever be a failure, the system will automatically rebuild the lost data so that it can be read again (however, the performance of the matrix will be reduced during this process). For more information about this, take a look at this article: “How does RAID 5 work? The Shortest and Easiest explanation ever!” by Janusz Bąk.

RAID 6. The Next Level of Excellence and Complexity

RAID 6 is sometimes called RAID 5+1. That’s because its structure is based on RAID 5. Generally speaking, it is RAID 5 but the array has an additional disk. Because of this, it contains two independent checksums. It is more reliable, but its implementation is more expensive. RAID 6 is so resistant to complete failure that it’ll only stop working after the failure of three or more disks. What does this mean? One important thing: It is two times more resistant than RAID 5. What’s more, the speed of the whole system is higher than in the case of a single disk. It makes RAID 6 an almost ideal solution (if we don’t take the costs of implementation into account).

RAID 5E (Enhanced) works similarly to RAID 5. It stripes data and parity across all of the drives in the array. The main reason it’s considered “enhanced” is because of a built-in spare drive. Thanks to that, RAID 5E offers good data protection and better throughput than RAID 5. Read and write operations are more efficient as well. Because of the four physical disks rather than three with an idle hot spare, actions can proceed faster.

Given the advantages of RAID 5E – good data protection, large storage capacity, and high performance (higher than when using RAID 5) – we might be tempted to ask: why is it less used in practice? The answer lies within its disadvantages.

The main drawback of RAID 5E is that the spare drive cannot become part of any other array. As such, if there’s ever a need to implement its functionality onto another array, the only way to make this happen would be by preparing another spare drive. The second reason is, RAID 5E only supports one logical drive in one array. And the most important thing that hinders RAID 5E from becoming anything more than a niche solution is that it’s firmware-specific. It’s also worth noting that not every kind of controller can support RAID 5E (in contrast to e.g., RAID 5).

RAID 5EE is an extended version of RAID 5E. It stripes data and parity across all of the drives in the array, but it has more of an efficiently distributed spare. Its rebuild time is also faster.

RAID 5EE provides good data protection – like that of RAID 5. It also increases throughput by using an additional hot spare disk in the array. Thanks to that, should a failure occur where we have to replace the failed drive, the data from the “Hot Spare” emergency area will be automatically transferred to the new drive.

In this case, the difference between RAID 5E and 5EE is that the RAID 5EE spare is interleaved with the parity blocks (it does not use contiguous free space for the spare).

RAID 5EE requires a minimum of four drives. Just like RAID 5E, it is also firmware-specific. This means problems can be expected when using a RAID controller. The implementation costs, as well as any other costs – such as those incurred in cases of failure, can be quite high as well. As such, in our opinion, this option is similar to RAID 5E in terms of usefulness.

There are many solutions based on RAID. We’ve presented only the basic possible implementations. However, there are many more options out there. We can still point to choices like RAID 1E, RAID x0, RAID 6E, 6EE, and many others. If you’d like to read about any of those, just let us know. We’ll do our best to give you the information you need.

We know that your data is priceless – use the Open-E JovianDSS Storage and RAID Calculator to know the correct amount!