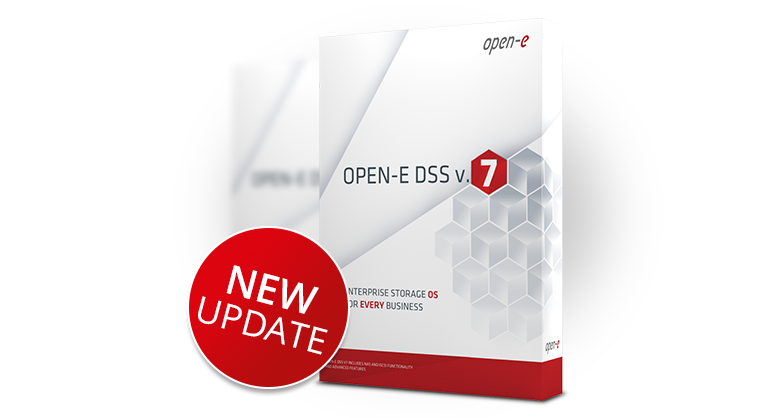 This week we have got some fantastic news for Open-E DSS V7 users! Our developers have just updated the renowned Open-E DSS V7 Data Storage Software with new features, thanks to which the software is now even more reliable than ever before. The update 56 is now available for download at no cost. You can download it directly from the Open-E website. In the meantime, read the article to get more information on Open-E DSS V7 up56.

In the previous update of Open-E DSS V7,  the active-active and active-passive failover for both the NFS and iSCSI protocol has been implemented. A cluster setup with Open-E DSS V7 provides fault tolerance and transparent failover via synchronous Volume Replication for NFS Shares or iSCSI Targets. It consists of two nodes where all volumes are synchronously mirrored over both servers. In case one server node fails, the software automatically switches all operations to the other one. Synchronous mirroring enables users to set up active-active or active-passive High Availability clusters between two locations with a distance of up to 70km (Gigabit Fiber).

In update 56, our developers added functionalities that make storage management and maintenance even more convenient, thanks to:

Now, with the new Open-E DSS V7 up56 the cluster can be easily managed with the High Availability Cluster Maintenance Mode as it enables users to reconfigure their setup without downtime as well as to replace hardware (network interface cards and storage units, or even the whole node) during production.

Apart of the HA Cluster Maintenance Mode, additional options have been implemented in software’s Data (File) Replication feature. Replication efficiency over WAN can be increased by using the block-based mode and compression. What is more, encrypted transfer of data is an optional functionality that boosts data security. Storage administrators can also keep better track of their tasks execution in their cluster setup thanks to the Check_MK monitoring tool.

The software contains also an updated driver for the Intel® 10 Gigabit PCI Express Network controller (ixgbe, v.4.3.13) and an improved set of tools for the XFS file system (xfsprogs, v.3.1.11).

To enable you a complete and clear understanding of all the new features , our CTO, Janusz Bak, hosted a webinar during which he presented the new High Availability Cluster Mainenance Mode in Open-E DSS V7 up56 ina form of a live demo. You will also learn how to reconfigure the cluster and replace a cluster node without downtime.