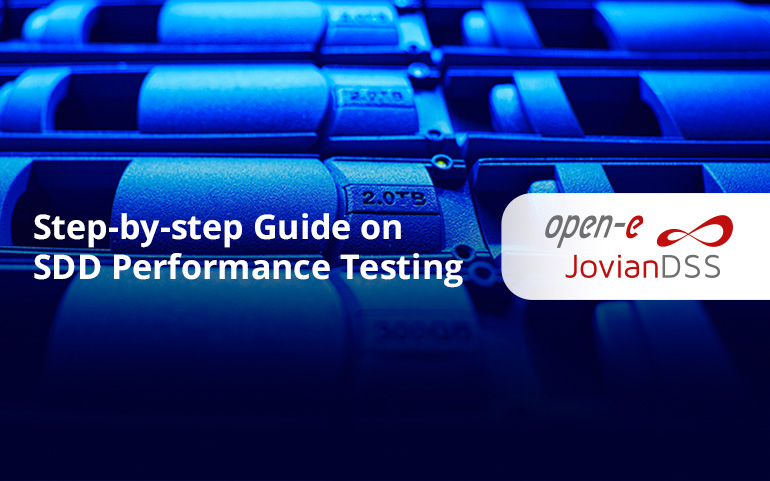 Your SSD-based IT environment encounters long load times, it is unresponsive, and generally, it slowed down so much that it is hard to keep your sanity?

Well, such a situation makes finishing even simple tasks really frustrating. Apart from the obvious steps like turning the device off and on again (cheers to Roy from IT Crowd!), checking your internet connection, and identifying apps that slow down your computer, you should definitely crack on your drives. Of course, enterprise data storage solutions administrators cannot let their environments waste any time on rebooting the server, as such users need constant availability. So, no Roy, we haven’t turned it off and on again, but we recommend some SSD testing.

Checking your HDDs vs SSDs

If you use a hard disk drive (HDD), defragmenting your HDD might be helpful. What is the process about? At some point, the collected data might be strewn around the disk. Due to this, the system finds it difficult to localize all the pieces of data required e.g. opening an app, which over time leads to a slow down. Defragging your HDD quickens the process of bringing the pieces of data back together, which helps the system localize the exact data.

But, if you use a solid-state drive (SSD), there’s no need for defragmenting it, as the technology is completely different from the one used in HDDs.

So what should you do if you suspect that your SSD might be the reason for the decrease in the speed of your system? In such a case, we recommend testing your SSD’s performance. We even have a ready step-by-step guide on how to properly run the SSD performance tests.

Take a look at a series of articles that explain the principles of SSD performance testing and how to interpret the results of such tests.

In the first part, we’re giving you a background for SSD performance testing, so there’s a simple recap on SSDs. Go to the Basics of SSD Performance Tests [1]: Recap on flash memory article.

The second part is all about handling the situation when your SSD runs out of free pages. Look at the Basics of SSD Performance Tests [2]: Garbage collection. What the SSD actually does during garbage collection is rewriting all valid pages from a particular block to a new one.

Next, we’re highlighting the issue of performance testing, what “purging the SSD” is, why it is necessary to run preconditioning, as well as what follows the preconditioning process. Read the Basics of SSD Performance Tests [3]: Test, filter, precondition article.

Last but not least is, of course, the summary, and we encourage you to also read the Basics of SSD Performance Tests [4]: In a nutshell article.

So, to cut the long story short – what do you definitely need to remember before you start testing the performance of your SSD?

Recently Open-E has released some brand-new certified hardware solutions based on SSDs!

If you’re thinking of enriching your system with such disks, we highly recommend getting acquainted with an example of powerful a powerful SSD – the KIOXIA FL6 800 GB Enterprise SCM NVMe™ SSD.

The hardware, most importantly, provides high-performance and low latency. The KIOXIA FL6 NVMe™ SSDs help to deliver consistently high IOPS and low latencies. With those multi-purpose drives for tailored data storage setups, you can benefit whether they are used as a read cache, a write log, or data drives, adjusting them to your business needs. Moreover, it is a RAM-competitive SSD solution. The KIOXIA FL6 NVMe™ SSDs address this by providing high-density flash memory at a significantly lower cost to be used as caching devices.