Want to reduce energy costs and the risk of possible data loss?

A dynamic increase of data volumes leads to greater hardware requirements and greater power consumption, forcing us to search for new solutions that can reduce costs. Therefore, every chance to significantly reduce hardware power usage costs, cooling demands, and time spent on IT administration is more than welcome. The same goes for every possibility of enhancing new or existing disaster recovery solutions and decreasing the risk of possible data loss. One of the opportunities for easier and more cost-effective data management is booting operating systems from remote iSCSI disks.

The iSCSI protocol can send SCSI commands over IP networks between clients (initiators) and SCSI storage devices (targets), thus eliminating the need for a local hard drive. This configuration, along with the Automatic iSCSI Failover, allows you to enjoy high availability of resources and better data loss prevention. This automatically presents you with the opportunity to easily make reliable backups and to improve both redundancy and dynamic resources allocation.

How to boot an operating system from a remote iSCSI disk?

We know how to boot an operating system from a remote iSCSI disk, and below you will find instructions on how to successfully carry out this process. 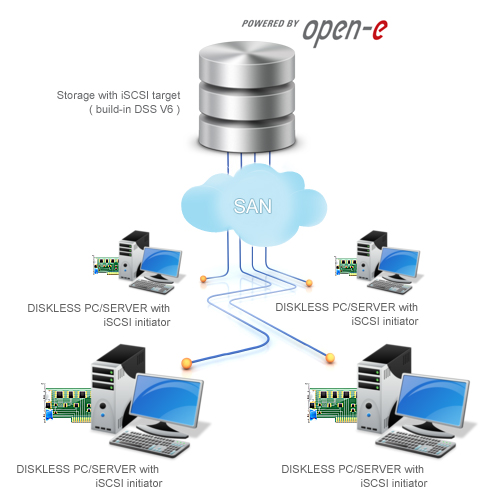 So what will you need?

1.Two Open-E DSS V6 licenses (or just one if you choose an option without an Automatic iSCSI Failover)

2.Host Bus Adapter (HBA) for every diskless PC or server as an iSCSI initiator

Our task was to boot an operating system from a remote iSCSI disk. For this purpose we used Open-E Data Storage Software V6, which provides iSCSI target functionality, and an iSCSI initiator, Qlogic HBA QLA 4050C (hardware). Integration with existing Ethernet networks does not require any special, expensive equipment or cables. Because Open-E DSS V6 has an iSCSI failover clustering feature, our iSCSI disk would be perfect for this job. However, if you need a low-cost solution, an iSCSI disk can be provided without failover functionality. Using this option, you will need only one Open-E DSS V6 system.

Configuration in a few easy steps:

The first thing to do is to configure the iSCSi failover. The complete configuration process is described here.

Secondly, the iSCSI hardware initiator will have to be configured. To access all firmware settings, not only those which are available directly from controller BIOS, an iSCSI Qlogic SANsurfer tool will be needed (you can download it from here).

Unfortunately, firmware settings can not be modified under an active connection between initiator and target, therefore an auxiliary computer system, with SANsurfer and Qlogic HBA controller installed, will be needed. In a prepared environment we ran a SANsurfer and enabled two firmware options: gratuitous ARP and ARP redirect. But why is this so important? Both Open-E DSS V6 iSCSI failover nodes - primary active and secondary passive - have network interfaces with unique MAC addresses and virtual IP's assigned.

What if an iSCSI hardware initiator is connected to a target on node 1 (primary active, virtual IP:10.10.10.1, MAC: 00:0A:E6:3E:FD:E1) and the power fails? As Node 1 becomes unavailable, the failover occurs. Connection to the target is then switched to node 2 with the same virtual IP but with a different MAC address. In order to reconnect an iSCSI hardware initiator we have to be able to refresh the MAC address, thus this requires previously mentioned firmware options to be enabled.

In this step, we connect to the Open-E DSS V6 target. It can be made now, on an auxiliary system using the SANsurfer tool, or later, directly from controller BIOS. We will describe how to configure the hardware initiator controller BIOS to boot from the target's LUN.

The first thing to do is to set the host adapter network:

In this case, the target IP is the Open-E DSS V6 virtual IP and the SCSI name is the DSS target name:

The last thing to do is to set the LUN as the boot device in motherboard BIOS.

Now everything should be well-configured and work properly.

We are curious to hear about your experiences with booting from Open-E DSS V6 iSCSI Failover, so we would like to invite you to take part in the interesting discussions on our storage community forum.

Did you find this article helpful?

Thank you for your feedback!

Login or register to rate this article.

Is there anything you’d like to improve on this web page? Please fill out the required fields and send us your feedback.

Give us your feedback