How to Keep Your Data Safe with Open-E DSS V6

Both backup and data security are essential in today's business environment. "To back up or not to back up?" - is no longer a valid question. There are various options and only one question: Which will be the best business solution?
Here are the basic alternatives that allow you to keep your data safe: 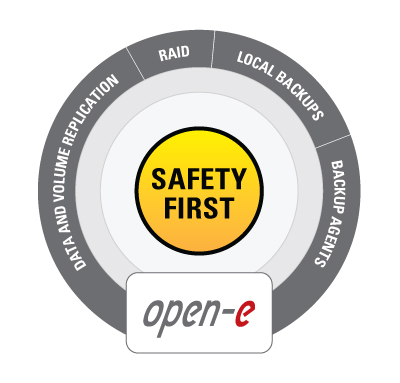 RAID (Redundant Array of Independent Disks) is essentially the cooperation of two or more hard drives in order to provide additional capabilities that are not available when a single disk is used. RAID allows users to enlarge data space, accelerate data transfer, increase reliability, and safely secure data.

RAID is not only a backup solution, but also improves disk performance and minimizes losses in case of disk failure. Clearly, RAID is an invaluable part of data security.

With Open-E DSS V6 there are two possibilities for RAID implementation - software RAID (based on CPU) and hardware RAID. The former is an ideal low-cost solution for a home or small business, while the latter offers premium performance for large implementations.

Software RAID offers higher complexity, including possible mix of different partitions and hardware RAID, and is highly effective for RAID 0 and RAID 1 implementations.

As a professional software, Open-E DSS V6 allows for launching both data and volume replication.

Volume replication is responsible for synchronization of whole logical units via a network. It is block-based and is very similar to RAID 1 (the only difference is if a network connection is broken, only changed data will be "rebuilt" at the destination - it means the destination will be rebuilt as a copy of the source volume). Synchronous volume replication may be a good solution for NAS logical volumes because it offers data redundancy and maximum safety. Because replication transfer speed is slowed while used simultaneously with the WAN, synchronous volume replication is most efficient when used over a LAN network.

Open-E DSS V6 also supports local backup for dynamic units like local HDDs, USB drives (USB Storage Support), or tape drives that are designed specifically for storing backup data. In short, this solution allows businesses to protect data by storing it in different locations on a removable unit. Moreover, it also makes real-time backups possible without having to shut the system down.

Functionalities provided by Open-E storage software help improving the backup process and reducing its cost. The use of removable units can drastically increase data security by eliminating various factors that directly impact an entire hardware facility.

Four servers and one hundred workstations - how to back them all up? One by one? Backup agents will come to the rescue!

Using backup agents on every machine significantly improves the backup process. In a nutshell, each unit running the appropriate software can be operated from one location, thus significantly accelerating the backup profess and helping to avoid common errors generated when using non-automated processes.

The variety of possibilities given by Open-E DSS V6 allows for implementing many methods of backup, creating a large range of possibilities for small, medium and large enterprises. The flexibility of Open-E storage software allows users to customize and modify solutions in order to minimize the human factor while coinciding with a growing company infrastructure. Therefore, Open-E DSS V6 maximizes the safety of every company's most important resource - data.

Did you find this article helpful?

Thank you for your feedback!

Login or register to rate this article.

Is there anything you’d like to improve on this web page? Please fill out the required fields and send us your feedback.

Give us your feedback